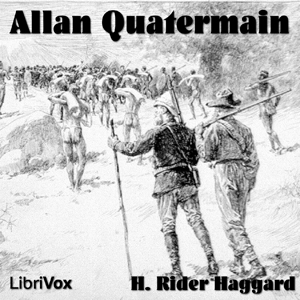 Allan Quatermain appears in some 15 to 18 stories or books by H. Rider Haggard. (The number varies by source and apparently depends on how one chooses to count the shorter stories.) Haggard suggests that Quatermain was the author of the works, and he (Haggard) only edited and published them. The most famous Quatermain book is the first, King Solomon’s Mines (1885), and the sequel (1887) was Allan Quatermain - in which the main character, shall we say, departs for a better place! All the other Quatermain books – even those whose events occurred earlier in time – seem to have been written after these two main titles.

The internal chronology of Quatermain’s life is a big mess, to be honest. As you study the research and learn of the numerous contradictions of timing of events in the books, you see that conjecture and invention are required to create any kind of internal chronology that makes sense. So my advice is to read (listen to) the books for enjoyment, don’t take notes!, and don’t worry about how one event simply can’t be possible on the apparent date because it conflicts wtih some other event in a different story! Hey! It’s fiction – anything goes!

Summary and recording by John Nicholson

Reviewer: GordMackenzie - favoritefavoritefavoritefavorite - June 23, 2008
Subject: Classic Adventure
This is a great and classic adventure. As mentioned by other reviewers, however, it is the "end" of the series (even though it was the second book written), so you might want try some of the other Quatermain stories first (King Solomon's Mines is a must and John Nicholson's Librivox reading is well worth listening to! But also try "Child of Storm", "Marie", and "Finished" among others).

While the reader, John Nicholson, is clearly not a Brit, or a South African, something in his tone manages to convey the heart of the great hunter as well as the great expanses of South and Eastern Africa.

I greatly enjoyed this recording and would recommend it.

John has narrated other Haggard books and I have listen to all of them, enjoying them immensely!

Please keep in mind Shadows, that LibriVox volunteers record books they love. LibriVox runs with a zero operating budget as all the volunteers donate their time and purchase their own recording equipment. Therefore suing LibriVox would be a futile effort.

Of course you do have the option of purchasing audiobooks or making your own recordings. No one is forcing you to listen to Librivox audiobooks.

I give John Nicholson TEN OUT OF TEN STARS! Well done John!

Reviewer: Shadows_Girl - favorite - June 21, 2008
Subject: Not the Second in the Series---but the last
Quatermain dies at the end of this one.

Oh and the recording is dreadful. Someone should sue Librivox for putting out such garbage.

Someone points out that those making the Librivox recordings are volunteers doing it out of the goodness of their hearts.

Seems to me they are doing because they hate literature and our ears. I find their amateurish efforts so offensive that I need to upchuck for several hours after hearing even a paragraph of "librivox" recorded text. These volunteers have no talent for dramatic narrative, no conception of how to properly enunciate the words, and for most of them English does not appear to be a language they have a great deal of familiarity with.
My advice to the people at Librivox would be eithyer to get some trained stage personalitities to do these recordings or just let a computer do it. I am less offended by the mistakes of the computer---being a machine it, at least, has SOME excuse.

About the reading: Considering the work is done by voluteers for free, not bad. And as librivox states, if you don't like a reading, you can voluteer yourself and do another version of the same book.

Uploaded by librivoxbooks on January 30, 2007